Don’t Forget To Feed The Food 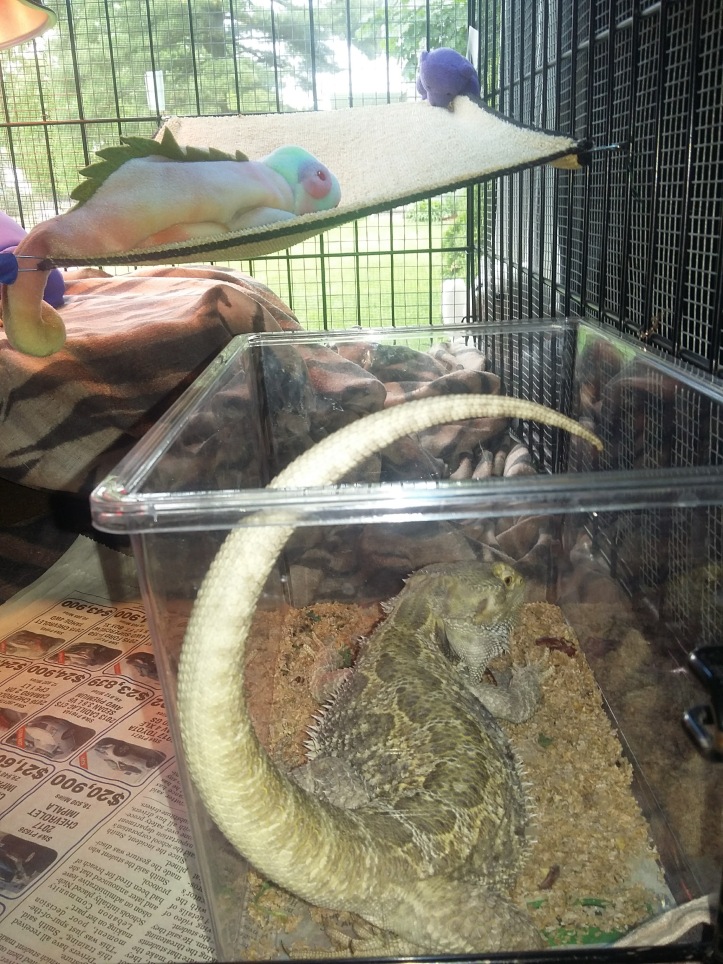 Didn’t know lizard owners had to be insect care-takers did ya? Here’s the scoop on that: Lizards need protein and many, if not all normal people supply this in the form of live food. You’ll see why I state this later!  As such, it is humane to take live food out of their in-store containers and place them in, if you relate to my sense of logic, a transparent container with air ventilation (um, atop the lizard cage in front of the window) so they can see the world before they die. This may be stupid but I’m cool with it.

To be more ridiculous, keep wormies supplied with the shredded cedar chip – looking stuff they came in because it’s their nature to burrow. Give crickets a hide to congregate within. Why not give ’em a good life before it’s gone? Wormies & crickets that lizards will eat need to be supplied with a little dish of water (a bottle cap-full will do). Do toss in rinsed produce in the form of grapes, leafy greens or whatever.

Never give the critters what you wouldn’t give directly to your lizard (i.e. citrus is toxic to Beardies). What the critters consume your lizard will be consuming. Discard un-eaten food after a day & replace with fresh. Please see here as to why gut-loading the critters prior to being eaten is important. Plus, it’s not polite to let something starve to death.

I need all to know Murph was only in that wee container up there for 30 seconds – long enough to eat 2 wormies (superworms from the pet store). The reason I placed him within the wormies’ abode is because I don’t like grabbing them with rubber tongs or anything to transfer to a dish, because despite their upcoming fate, I still don’t want to squeeze & hurt them. I don’t want to collect them with my fingers because, well, they grab my skin with their little legs as if they’re fighting to hold on & not be placed down as food. This breaks my heart.

I feel like a murderer when I struggle to descend them & karma is extra uncool to me. I have my own views about life. An honesty about myself is that I happen to have an affinity for guns, martial arts, knives, swords, military vehicles, very much including fighter jets & all things bad-ass! However, I try with all my might to not kill innocent critters of any species. They’re all beautiful & should be allowed to live their lives, in my opinion. After all, it’s not a spider’s fault that it’s a spider, and it strives to survive. Who am I to decide it shouldn’t have it’s own life?

Which, loops me back around to the wormies. So the ONLY reason Lil’ Murph is eating live food is because I am trying to entice him to eat like a normal lizard again! He typically gets his protein from some produce (sigh – now in the form of smoothies) and un-salted crushed nuts (sigh – now added to said smoothies). He decided to behave like a human infant & stop eating solid food by himself (My out-of-the-country trip really messed him up, I guess). However, everyone….he ate (by hand though) solid food 3x in 2 days (besides wormies)…. un-seasoned chicken and cantaloupe!! Maybe we’re getting closer to the goal. That being typed, he currently has had a pyramid of sliced bananas near his hungry self for an hour now. It remains un-tounged! 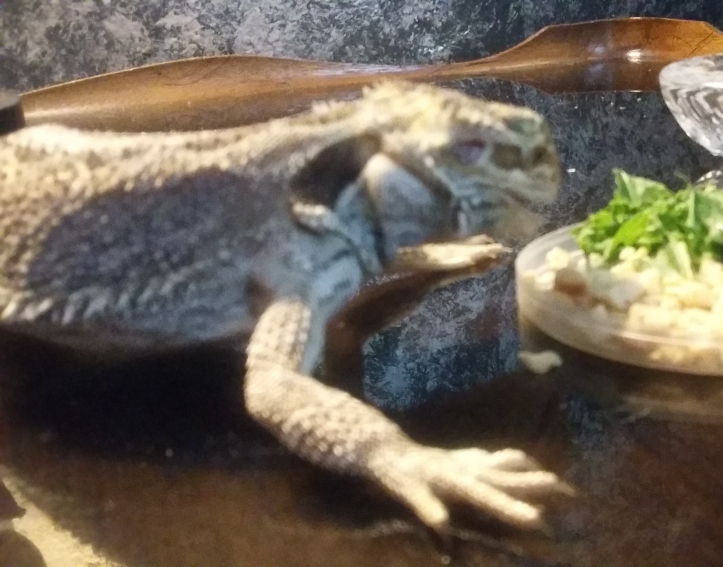 It’s a bit blurry, but look at that adorable Dragon skull structure!!!

Lil’ Murph doesn’t have a normal Mommy. Why should he be a normal lizard? Meh, ordinary is often boring anyway.

“Give me Lizardry or give me Death!” – ♥Dawn Renee